THE BEST STORIES ARE IN THE DETAILS

Suzy Müller
Anxiety in the loop-heads

Suzy Müller paints her feelings, and you can follow her life through the evolution of her art, now on display and sale, at the Al-Tarhal Gallery. Such expression, especially the anxiety in her life, is expressed through a class of creatures she has cooked up on her own: vaguely human forms with their faces cut out that could represent everybody – or their deepest, faceless anxieties.

And yet Suzy’s work isn’t dark – indeed it is, apart from a series of black and white drawings, extremely colourful. Perhaps she has found, in recognising the creatures that trouble her, the importance of the positive. The largest of these works – and we’re talking 220cm long – is in what Suzy describes as a ‘warm blue.’ That took her a year and over 100 layers to complete. “Colour,” she says, “is feeling.”

That sort of thought echoes the development of the best-known Expressionist painter of all time, Vincent Van Gogh, but Suzy insists she doesn’t seek inspiration from other artists, or outside influences. Instead, she looks within, and paints what she feels. Such works of hers might even change colour as she paints over yet another layer, as the painting evolves with her mood, or life. “The beginning is fact. And over that come my feelings.” Her creatures evolved too, built up over generations of paintings that might have started with just abstract lines and gradually began to take form.

This evolution of things, from her life to paintings that seem wound around each other, is another theme you will find through the work. “Sticking to the same thing isn’t good for an artist. You must change in your art, as you change through your life. We are artists 24 hours a day.”

It was around 2005 that Suzy built up her thoughts to produce an entire family of anonymous creatures straight from her emotions, beings that she calls Schlaufenköpfe, which roughly translates from German (it is a made-up word) into ‘loop heads,’ describing the shape of the creations.

The creatures themselves always seem a bit animated, as much in motion as they remain anonymous.

Suzy Müller always wanted to be an artist, painting even when she was little. When asked of inspirations she always pointedly says she has none, but admits she studied William Turner. That seems most unusual given that Turner was a landscape artist in the best of 18th and 19th century traditions, and Suzy’s work seems as far removed from that sort of scene as possible. But it wasn’t the subject that Suzy was admiring; it was Turner’s light, his mix of colours, the emotions he conjured up. That’s what she was after.

It wasn’t easy. Suzy started with commercial art, and became art director in an advertising agency. At that time she told herself that she would work for ten years, and then would find inspiration. And that’s exactly what she did, although it would take another handful of years after setting off on her own for her work to gradually be recognised in the art market. Being true to herself and painting what she felt was, in her words, “a wonderful feeling.” 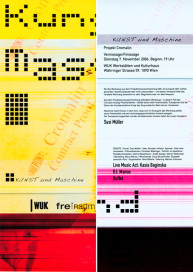